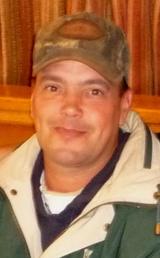 Michael Hayes Belanger, “Magic Mike,” 43, of Amesbury, died unexpectedly of heart complications in the woods of Amesbury on Saturday, doing exactly what he loved, hunting with friends. He was born on June 16, 1970, in Haverhill, and was the son of Janet Hayes Batista of Amesbury, and the late Frank A. Belanger of Bedford, Pa. Michael grew up in Amesbury on “Pole Hill,” and would make friends with everyone. He was well known by many for his hunting and fishing “expertise.” He also enjoyed being the life of the party, entertaining all, and making people laugh, even at their darkest moments. He was also a talented cook, artist and musician. He was well known for his bird calls, deer calls and cartoonish impersonations. Michael spent some years caring for his ailing father, Frank, and recently moved back to Amesbury to live with friends. His friends were his life and greatest fans, men and women alike. Michael’s warmth and sensitive nature drew people to him. He was like a bonfire on a cold night, everyone wanted to be around him. He is survived my his mom, Janet Batista of Amesbury; sisters, Michele Belanger of Marblehead, Darcy Gray of Edgewood, Wash., and Jody Anderson of East Graham, Wash.; his brother, John Hart of Enfield, Conn.; several nieces, nephews, cousins, aunts, uncles, and close friends. Michael was a true light in peoples lives. His spirit will live on in everyone that was lucky enough to know him.