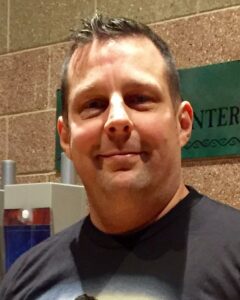 It is with much sadness to announce the passing of Michael L. Ventre, formerly of Wilmington, MA on January 5, 2022 after a brief illness. Mike was born in Lowell, MA on June 7th, 1971 the dear son of Leslie Sarchione and Harold Ventre. Mike will be fondly remembered as a funny, kind and generous soul. Mike’s love of his family and many friends was evident in everything he did. Michael was proud of his service to our country as a four year veteran in the US Airforce. He will be forever loved and missed by all.

Mike was the proudest father to the “apple of his eye,” his beloved daughter Kasandra, they were inseparable. He also leaves behind his daughter’s mother Pauline Ventre, his godmother Bernadette Collins, his godfather Andrew Ventre, two sisters Missy and Ashley Ventre and long time companion Kerrie Yost who he loved unconditionally. He also leaves behind many, many cousins, aunts and uncles. Mike is the grandson of the late Bernardino and Katherine Sarchione and the late Alice B. and Paul Ventre. He is the nephew of the late Kenneth Sarchione and his late cousin Kenneth Sarchione Jr.
There will be a Celebration of his Life at a later date.