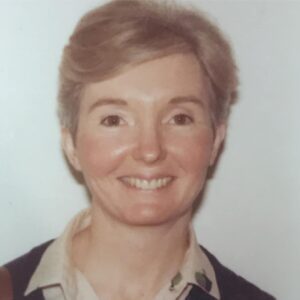 Attended Girls Catholic High School and later Barry University. The daughter of Malden Catholic football coach William Grant, as a child she enjoyed attending games he coached. After high school she joined her father in Miami, FL where she attended college and met her husband, Edward.

She followed her father’s vocation working as a teacher, and later turned her attention full-time to raising her three children. While parenting she studied nutrition and developed a great interest in cooking. Her family and friends appreciated her culinary skills. A formidable opponent on the tennis court, she loved the game and the companionship of her fellow players.

Nancy lived in Somerville and Medford as a child. After returning to Massachusetts with her husband, she and her family lived in Lynnfield, then later relocated to Long Island, Minneapolis, and Chicago before retiring in Grantham, NH. Afflicted with Alzheimer’s she enjoyed the love and support of her extend family in Andover later in life.

Survived by Edward, her husband of 62 years and children Edward, Kerry, and Christopher. Also survived by 13 grandchildren and 6 great grandchildren, sister Barbara Callahan, cousins John Higgins, Bob Higgins, and Mary Catherine Harbin along with many nieces and nephews. Predeceased by her brother Richard Grant, cousin Richard Grant Higgins, along with parents William and Sherry Grant.

Funeral Mass will be said at St. Augustine’s church, Andover on Saturday, May 18 at 9:30.

In leu of flowers, donations may be made to the scholarship fund at Malden Catholic High School.