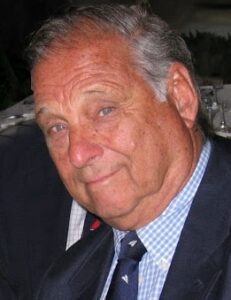 Paul D. Shuwall, a longtime resident of Manchester-by-the-Sea, died peacefully at home on March 6, 2016. He is survived by his wife of 58 years, Susan Margaret Stokes, and their three daughters: Margaret Shuwall Briggs of Sherborn, MA; Meredith Shuwall Pasquesi of Woodside, CA; and Georgia Stokes Clarke of Bali, Indonesia, along with three loving sons-in-law: Adam Briggs, John Pasquesi and Philip Clarke, and four grandchildren: Benjamin Squibb Briggs, Timothy Dunlop Briggs, Theodore Paul Pasquesi, and Nina Marie Pasquesi. He is also survived by his sister, Barbara Shuwall Barr, and her husband, Clifford Barr, of Boca Raton, FL. Paul was born on March 26, 1930 in Philadelphia to Edward David Shuwall and Esther Dolgien Shuwall. He grew up in Scarsdale, NY and graduated from Scarsdale High School in 1948. After receiving a degree in Chemical Engineering from Lafayette College in 1952, he worked at American Cyanamid for two years before earning an MBA at the University of Pennsylvania’s Wharton School of Business. In 1956 he joined Arthur D. Little in Cambridge, MA, where he served as a management consultant for 26 years before moving to Memorial Drive Trust where he successfully managed the ADL pension fund assets, investing in venture capital and traditional enterprise. His keen, analytical mind was a gift he generously shared with others, including owners of myriad small businesses. An avid sailor all of his life, Paul belonged to many nautical organizations, including the Manchester Yacht Club, where he served as Commodore in 1997; The Cruising Club of America; and The Corinthians, for which he co-founded the New England Chapter. He was happiest at the helm of a sailboat, particularly Skylight, his Mason 43′ in which he completed four Marion-Bermuda races. As captain of seven yachts over his lifetime, he sailed from Venezuela to St. John, Canada and spent countless summers navigating the fog of Maine with his crew of girls. He mentored many other young aspiring sailors, including his four grandchildren, whom he loved to take sailing and swimming off his boat. His boats provided endless opportunities for him to apply his woodworking skills, including a varnished teak tiled cockpit table to an extra-long swimming ladder, all crafted in his expansive home workshop which he designed and built himself. When not on ocean, he often took to the slopes, skiing for many years at Cannon Mountain in New Hampshire, before discovering the powder of Utah and other western mountains, along with that in Europe and Chile. He taught his daughters to ski the blue ice under the aerial tramway of Cannon Mountain and his ski house, Sunset Farm, in Sugar Hill, provided the perfect setting for him and Susan to entertain numerous families. A consummate host and gourmet chef, Paul was famous for his homemade eggnog, his spectacular Thanksgiving gravy, Beef Wellington, and his obsession with blueberry pie. An aficionado of all shellfish, he also was known for his convivial oyster parties, where he could be found exercising his keen wit and dry sense of humor. His favorite music, Dixieland jazz, was a constant soundtrack in the house, the workshop, and on the boat. Shuwall loved puns and plays on words, which he often shared with his grandchildren, who called him “Papa.” After his retirement in 1992, Paul’s main objective was to dodge the frigid New England weather, first by cruising the turquoise waters of the Caribbean for twelve winters before dropping anchor on his favorite island, Virgin Gorda, where he and Susan entertained family and friends for nineteen seasons. A planner by nature, he was always researching his next trip. He and his wife explored much of the globe, traveling to six continents, via various modes of transportation, including his favorite, the Windstar fleet of sailing vessels. He was a member of the Essex County Club of Manchester for fifty years and belonged to the congregations at St. John’s Episcopal Church, Beverly Farms, MA and Emmanuel Church, Manchester, MA. An adventurer, builder, and fixer, in the literal sense as well as figurative, Paul was, above all, a loving husband, father, grandfather, and friend, who will be deeply missed by all. A private memorial service will be held in the spring followed by a celebration of his life for family and friends. In lieu of flowers, please send a contribution in his memory to the Kidney Cancer Research Program at Beth Israel Deaconess Medical Center, c/o Dr. David McDermott, 330 Brookline Ave, Boston, MA 02215. To leave a message of condolence or share a memory, please click below.