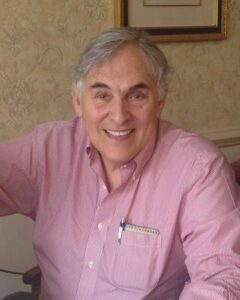 Ray Allan Frieden, 77, of Essex, Massachusetts, died April 27, 2021, at the Kaplan Family Hospice House in Danvers after living with dementia for many years. In 2008, he survived non-Hodgkin’s lymphoma.

Born on Halloween 1943 in Galveston, Texas, Ray was the first of five children born to Edward H. Frieden, a biochemist, and Betty Frieden (née Barnett), a librarian. When he was very young, he and his family moved to Massachusetts, where Ray resided for the rest of his life.

Ray was in the first graduating class of Newton South High School and attended Harvard University, where he earned a bachelor’s degree in mathematics followed by a master’s degree in architecture from the Graduate School of Design. He was an exceptional athlete on the track and football teams in high school and college, and he held state records in both shot put and discus, achievements his youngest son Ben shared with him. Ray’s family and friends liked to brag about his appearance on the April 25, 1969, cover of “Life” magazine standing in support of striking Harvard students.

After graduating from Harvard, Ray and his wife, Nancy, spent two years serving in the Peace Corps in Iran, where their first son, Marc, was born. While in Iran, Ray worked as a city planner for the Ministry of Interior. After returning from Iran, his first job was as a designer/researcher at Lelanite Corp., where Marc works today. Later, he worked for Cambridge Seven Associates, followed by a stint as the town of Plymouth’s planning director from 1973 to 1983. During his time as planning director, Ray was proud to host a man-on-the-street-style radio show on WPLM, an unusual side gig for a high-ranking town official. In Plymouth, Nancy and Ray rounded out their family with two more devoted sons, Gilbert and Benjamin. After Plymouth, he ran his own real estate consulting firm, Planning & Design Associates.

In the early ’90s, Ray and his brother Bob worked together at LearningWays, a computer startup that produced innovative educational software for young children. In 1994, he began working for the Massachusetts Bureau of Housing, eventually becoming director of the Bureau of Housing Development and Construction. He managed projects to renovate subsidized housing throughout Massachusetts and was rightly proud of his innovative solutions. He retired in 2013. Ray was a member of the American Institute of Certified Planners as well as the Massachusetts Association of Planning Directors. He also served on the Conservation Commission for the City of Worcester.

Ray was the firstborn of his generation, which included 21 first cousins with whom he remained close. He is survived by his beloved wife of 54 years, Nancy (née Perry); three sons; daughters-in-law Becky Frieden and Hannah Surabian; and grandchildren Sophie, Hannah, Theron Ray, and Gessa. He is also survived by siblings Jeanne Frieden (Victor Aronow); Robert Frieden (Norma Frieden); Roger Frieden (Kathryn Frieden); and Joyce Frieden Rosenthal (Greg Rosenthal), as well as many nieces, nephews, cousins, and friends.

Ray had a big smile and a bigger heart. He was quick-witted and loving with his grandchildren, and he enjoyed making them laugh. He also loved making kites to fly on the beach and going out on boats.

A passionate lifelong fisherman, Ray loved to visit Sumner Brook Fish Farm in Ossipee, New Hampshire, where some of his ashes will be scattered. His ashes will also be interred at the Spring Street Cemetery in Essex. A memorial service will be scheduled for a later date. Donations may be made in Ray’s memory to SeniorCare Inc. at https://seniorcareinc.org/donate/. Please direct your donation to the “Money Management” program at SeniorCare. SeniorCare is the organization in Gloucester that provided Meals on Wheels to Ray, and that recommended Day by Day, the adult day care he enjoyed for years. SeniorCare also hosted a caregiver support group that Nancy and Gil relied on. Ray’s son Gil is the manager of the Money Management program at SeniorCare.