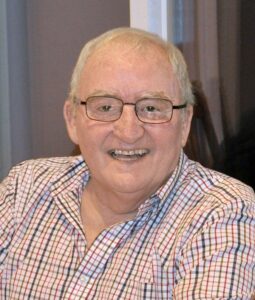 Raymond “Ray” C. Crewe, 72, of Stoneham, MA died peacefully at the Sawtelle Family Hospice House in Reading, MA on March 31, 2018 after a yearlong battle with cancer in which his optimism and good humor never failed. He was born August 8, 1945 in Lurgan, Northern Ireland and served in the British Army for 12 years before coming to the United States. He worked at both McLean’s Hospital and Raytheon before retiring in 2009.

Ray enjoyed spending time with his family whether at a holiday dinner or watching one of the grandkids games or dances and wherever he went he would always be whistling or singing a tune. He was known for his humor and was the king of one-liners. His grandchildren would always be waiting for a new one from “Papa” and they would always have one for him in return. Ray played soccer for years, loved coaching and you could say he was an avid fan. He was passionate about his favorite team Newcastle, and was always chatting about his games. Ray would always be willing to help out and lend a hand where needed. He started volunteering in the food pantry at Lazarus House Ministries in Lawrence, MA a few years ago and enjoy going every week. From his friends at Lazarus House – “Ray befriended LHM staff, volunteers but especially our guests. I believe he spoke to each guest as they came through distribution. He was especially happy when there were children that he could talk to. Our guests loved him greeting them, and in return they shared what was going on in their lives. In return he would offer a smile, maybe some sound advice but more often than not a hand on their shoulder and a gentle nod that things will get better.”

Donations in Ray’s name may be made to Lazarus House Ministries, Lawrence, MA, at https://lazarushouse.org/donate/