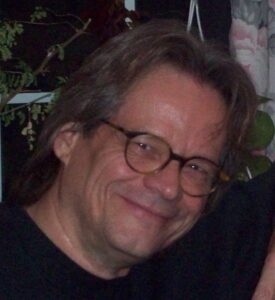 Rev. Edwin Holt Hughes IV, known to all as HOLT, moved on from this life on Friday, March 7, 2014, after a gallant 5-year fight with cancer. We will always remember his mischievous smile, his lopsided walk, his boyish enthusiasms (bicycling, gadgets, goofy comedies, ice cream) and his deep loves (his daughters, the ocean, animals, social justice, Red Sox baseball). Even in his last days in hospice, he kept his wry, wacky sense of humor and gentlemanly manners. A man of kind and yet ever-questioning spirit, he offered comfort, understanding, and joy to so many during his years as a Methodist minister. Among his many parishes were North Church (Indianapolis IN), St. Stephen’s (Marblehead MA), Grace Church (Cambridge MA), Old South Church (Reading MA), Maple Street Church (Lynn MA), and Haven United Methodist (East Providence RI). Born in Indianapolis on July 26, 1951, the first child of Ann and Edwin Holt Hughes III, he attended PS 70, PS 84, and Broad Ripple High School, from which he graduated in 1969. Holt was a religion and philosophy major at Baker University in Baldwin City, Kansas, where he was also a 4th-generation member of Delta Tau Delta fraternity. He received his theological training at Boston University School of Theology, Christian Theological Seminary in Indianapolis, and Vanderbilt University Divinity School. He is survived by his daughters Annie Hughes-Lee and Molly Hughes, his mother Ann Hughes, his sisters Holly and Buffie Hughes, his son-in-law James Lee, his adored grandson Carter Lee, and nieces and nephews Hugh, Tom, and Grace Ward and Frank and Lucy Sternberg. His service will be Saturday, March 22nd at 3pm at the Community Church in Quincy, MA. in Holt’s memory can be sent to: Project Bread at www.projectbread.org/walk — search for Team Hughes Rules.