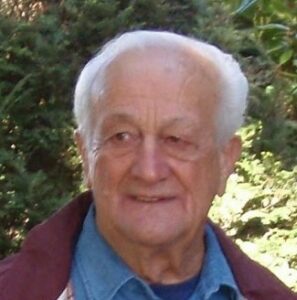 It is with joy and sadness that we celebrate the life and passing of Richard Anthony
Barricelli. He died peacefully on Christmas Day surrounded by his family at Melrose-
Wakefield hospital after a brief illness. He was ninety-five years old. Richard was born at
home in Malden, Mass on May 29, 1927. He grew up in the Edgeworth neighborhood of
Malden.

Richard was a WWII Era veteran, having joined the US army when he came of age. He
served in the West Pacific theater of operations. He was awarded the Army of Occupation
medal and World War II victory medal. He also served in South Korea. He worked as a
union construction laborer and later became a US postal employee and retired in 1992.

He is the last surviving sibling of his parents Casimiro and Carmelia Barricelli, immigrants
from Italy. He is survived by his wife Carol Barricelli, son Richard and his wife Susan, son
Michael, daughter Suzanne and her husband Chuck, and grandchildren Michael and
Jonathan Barricelli, and Leigh and Benjamin Collins.

He loved gardening and often had a verdant vegetable garden. He was a loving caring
father and a loyal husband. He stayed well connected with his social circles and enjoyed
spending time with his countless friends of many years.

A funeral mass will be held at Sacred Heart’s Parish at 315 Main Street Malden on
Thursday January 5 th 2023 at 8:00 a.m. followed by a reception at 9:30 a.m. at the chapel next door (287 Main St.). In lieu of flowers, donations may be made to the Alzheimer’s Association.