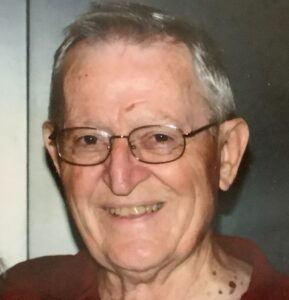 Robert “Bob” Ellsworth Staples passed away on December 7, 2021 in Beverly, MA at the age of
96, after battling a brief illness. He was surrounded by family. Bob was born on December 1,
1925 in Stoughton Massachusetts to Ralph Ellsworth Staples and Grace (Robinson) Staples. He
is survived by his older sister Dorothy (Gay) and his younger brother Ralph.
As a child, Bob developed a love of tools which influenced his many hobbies through life.
Between car engine repairs, the making of telescope lenses, boat building in his cellar, making
jewelry with minerals he collected on family vacations, woodworking, and clockmaking and
repair, Bob always had something to keep him busy. He also loved chess, and would never turn
down a good match.
As a teenager, Bob served in the US Army in World War II, earning a bronze star as a combat
infantryman in Europe. After the war, Bob studied at Wentworth Institute and began his lifelong
career as a repair technician at IBM. But Bob’s greatest achievement was the love of his life
Virginia, “Ginny”, whom he met upon his return to Stoughton after the war. They married in
1947. Bob and his wife, Ginny, participated in plays with the local community drama group to
overcome his shyness and make new friends. They spent 74 happy years together. Robert is
survived by Virginia (Ginny), his son David Staples and his wife Sharon, his daughter Shirley
Kelley and her husband Dan, five grandchildren, and nine great-grandchildren. David and Shirley
have fond memories of childhood vacations and quality family time together, and his
grandchildren and great-grandchildren will always cherish special memories visiting him at the
beach in Manomet, or learning how to play chess. Bob was active in various Congregational
church communities in Massachusetts and Florida. A freethinker, Bob took after his ancestors
who were the early settlers of Massachusetts on a quest to pursue freedom of thought and
freedom of religion. He was insightful, witty, and humorous, sparking interesting
conversations and making those around him laugh and feel loved- even during his illness.
Robert will have a private burial and his memorial service will be announced in early 2022 for
friends and family.