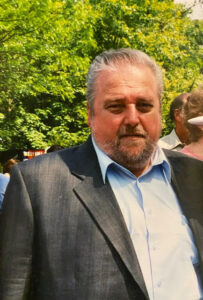 Ronald R. Hayes, 75, of Franklin, MA died peacefully January 2, 2022. Formerly of Westwood, MA, he was the son of the late Chester F. Hayes and Agnes (Zukowski) Hayes. Brother of Chester F. Hayes Jr of San Jose, CA, and the late Linda C. Bernsen.
Loving father of his 3 children; son, Scott Hayes and his wife Heather Hayes of Taunton, MA, and two daughters, Hayley Zimmer of Mansfield, MA and Charese Zimmer of Arlington, TX. Grandfather of Alexis, Andrew, and Piper. He was also a father and “dad” to his stepchildren; Neil Christensen, Kimberly Talamini, and Jeff Christensen.
Ron had a passion for fast cars and Triumph motorcycles, was a fantastic mechanic, and excelled at anything he applied himself to. He enjoyed cooking for family, especially on his charcoal smoker, and the chili he made for family events. He was a lover of nature and the outdoors, fishing and being out on the water. He was also known for his love of Western films and anything John Wayne. Ron had a sharp sense of humor and always had the answer – knowing a little bit about everything.
In addition to his children and grandchildren, he is also survived by many other nieces, nephews, and cousins.
Services will be private.