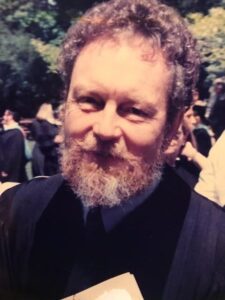 Stephen Thompson, 79, of Framingham, Massachusetts, died in early July 2020 after a health crisis revealed previously unsuspected advanced heart failure. Following nearly two weeks of exquisitely skilled and deeply compassionate care in the Heart Center ICU at Mass General Hospital, it became clear that further treatment options were very limited, and Stephen decided to return home to enter hospice care. He completed his life in comfort, contemplation, and conversation, held up by an outpouring of love and support from the many people who treasured him. He died peacefully in mid-July, with his wife at his side.

Stephen completed his undergraduate and master’s degrees in philosophy at Boston University, then earned a Master of Divinity degree at Yale University Divinity School. Stephen began his career in parish ministry, with a particular interest in youth ministry, where he proudly engaged in community organizing around the anti-war effort during the Vietnam War. After several years in parish ministry, he realized his passion lay more with discourse than with dogma and shifted his focus to education. Stephen returned to BU to pursue a PhD in Philosophy and began his teaching career there.

Stephen was invited to teach at Pine Manor College in 1969, as an adjunct professor and quickly became inspired by the mission of the college in fostering the empowerment of young women. He eventually earned tenure and was a beloved professor for over 40 years. While teaching was his passion, Stephen felt that, more importantly, his role was to “foster learning.” He was a self-proclaimed feminist and would often credit his mother for helping him to see a lived version of Betty Freidan’s, “The Feminine Mystique” dilemma, and for inspiring his desire to empower young women to find their voices.

Stephen taught a wide variety of philosophy, religion, and interdisciplinary courses throughout his career, including “Time, Change, and Death: The Meanings of Mortality,” “Personal and Professional Ethics,” and “Culture, Consumption and Identity.” Stephen was also active in the administration of Pine Manor College, serving as Chair of the Arts and Humanities Division; Dean of First Year Students; Dean for Advising and General Education, and Dean for Co-Curriculum and Advising.

Stephen was proud of his anti-war activism, and thrived on contentious, spirited intellectual conversations about world events, politics, ethics, gender, and anti-violence. He was a deep thinker and a voracious reader…always seeking to learn the entirety of a topic or issue and then attempting to explore and discuss competing perspectives. He was interested in examining the constructs of masculinity, misogyny, and gender roles, and tried to grapple with questions relating to relationship violence and the elements of healthy relationships. This past year, he worked with The White Ribbon Group of the Sudbury, Wayland, Lincoln Domestic Violence roundtable, that explored many of these issues.

Stephen loved exploring art, creativity, and nuance, and treasured his many artist friends who taught him how to see the world, light, color, and shadow, from multiple perspectives. He was a gifted and creative cook, enjoyed wine, and loved to share these passions with dear friends and family. He had a robust sense of humor, and eagerly told jokes and played pranks (to which his former colleagues can attest!)

He was an avid Red Sox fan, and found inspiration in the work of Leonard Cohen, and other singer-songwriters who truly had a message. Stephen loved nature, and time spent each summer at the cottage on the Maine coast. He delighted in hiking in the woods, walking along the ocean, and trips to the Pacific Northwest and New Mexico. He also loved being home, and never tired of watching the various creatures who shared his yard. He was fascinated by various nesting birds, especially his recent obsession with hummingbirds who kept him company during his final days at home.

Stephen was a simple and humble man. He listened deeply to people and tried to reach them through common interests and passions. He loved nothing more than introducing those he cared about to each other, sometimes creating awkward moments for all involved. He was very endearing. He was unafraid to tell people that he cared about them. He was loving, nurturing, and fiercely committed to family and friends, and felt blessed by what he referred to as “the circle of his love.”

A virtual memorial service celebrating Stephen’s life will be held on August 15, 2020 at 3:00pm. Please join us with the following Zoom link:

If you would like to make a gift in Stephen’s honor, please consider the following: