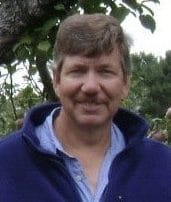 Steve was born in Alexandria, VA, on October 17, 1959. He spent the first three years of his life in Aschaffenburg, Germany while his dad served in the military. The family eventually settled in Mansfield, MA, where he grew up. He was a member of Boy Scout Troop 14, in St. Mary’s Church. He loved all things outdoors. He played the guitar from the time he was a teenager and was an avid reader of mystery novels. He graduated from Mansfield High School in 1977. He started working in the construction field, right out of high school. He married his beloved wife, Jo Ann, in September of 1981. They had two daughters, Beth and Jenn.

Steve worked in the construction field for over forty years. He worked on jobs all over New England, some in New York, Jamaica and even out as far as Wyoming. In recent years he worked closer to home for American Builders, as a construction supervisor, on Cape Cod and the Islands. Steve taught many people, including his daughters, the pride that comes with building something with your hands.

He was a lifelong outdoor enthusiast. He was a member of the Easton Rod and Gun Club for over 40 years, where he participated in many annual events, and went target shooting and fishing. When he took time away from work, you could often find him at his brother, Jim’s, lake house, fishing, boating or snowmobiling. While in Wyoming, he was able to hike and ski with his youngest brother, Bill. One of his greatest outdoor passions was his motorcycle, which he took on trips up Mt. Washington and on charity rides. Steve shared his love for the outdoors with his granddaughters Abby and Savannah, He enjoyed taking them fishing, bike riding, whale watching, and to the beach.

Steve and Jo Ann also enjoyed traveling. They took trips with and without friends to Key West, Jamaica, the Grand Canyon, New Hampshire, Maine, and the Smoky Mountains. They enjoyed the historical and natural sites as well as the local culture.

Steve died on November 27, 2019, at Brigham and Women’s Hospital, after a six year long fight with leukemia. He was surrounded by his beloved family. In lieu of flowers, the family is asking that donations be made to the Leukemia and Lymphoma Society, in his honor.