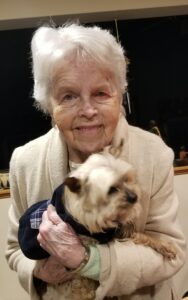 Vieno (Mattila) Fruguglietti was born in Fitchburg, MA December 6, 1921
Vieno passed away Dec 8, 2020, 2 days after her 99th birthday, while having breakfast at home with her daughter, most likely from heart failure due to pneumonia. She made it to 99, which was an amazing feat considering two of her three brothers, (Walter and John) and father, Henry all died of massive heart attacks in their 40s, her brother Waino died in his 40’s as a result of a car accident in CT and her sister Viola died of Lou Gehrig’s disease in her 60’s and her mom Hilma died of a stroke at 79.
She grew up on a farm with chickens and work horses in Townsend, MA with her parents Henry and Hilma (Makela) Mattila, who had emigrated from Finland. She had to quit school in the ninth grade to support her family after her dad had suddenly died by doing housekeeping and babysitting jobs. She grew up speaking Finnish and learned English in school. She would frequently speak Finnish with her sister Viola to keep the knowledge of the language alive.
She met her husband Frank Fruguglietti at Whalom Park (she often said how much she loved the roller coaster there and how she rode it 26 times in a row once), around the age of 19 and they married a couple years later. He was 17 years older as she loved to tell people, “he lied about his age and said he was 10 years younger than he was” and she didn’t know until their wedding day at City Hall in Worcester. He was very protective of her, therefore didn’t let her get her driver’s license and wanted her to stay home, which she did. He was born in Italy and came over on the boat to Ellis island to live in New York City with relatives when he was a teenager and eventually moved to Fitchburg where he had other relatives and owned his own Tailor shop, DiLucci the Tailor (purchased from a relative). He died in 1992 at the age of 87 and then she continued to live in their home in Fitchburg, MA until 2016 when she moved in with her daughter in Woburn, MA.
Her 2 children, Ralph (Steve) Fruguglietti of Fitchburg and Diana Fruguglietti of Woburn were the focus of her life and she often said how grateful she was to have them and that that was her biggest accomplishment. She also leaves 2 grandchildren Ashley Fruguglietti of Ashburnham and Lily Fruguglietti of Fitchburg, 3 great grandchildren and one granddog, Mocha, that she adored, along with several nieces and nephews. She cared deeply about all of them and was always trying to be helpful as much as she could, especially in her younger years and loved to make people laugh.
She loved all animals, especially dogs and cats and loved to feed and watch the backyard birds. She helped Steve with his menagerie of animals when he was growing up, including homing pigeons, ducks, flying squirrels, guinea pigs, etc. When Diana was younger, Vieno and Frank raised German shepherds and kept four adults, one all white mom, one all black dad, and 2 pups that were tan and white and sold many litters of puppies. Frank kept a vegetable garden in which she cooked the fried zucchini flowers from, a family favorite, and Diana helped her with many flower gardens eventually taking them over.
There will be a memorial service in early summer provided the covid situation is more under control. The ashes will eventually be buried in Hillside Cemetery in Townsend next to her husbands and other family members. In lieu of flowers, donations may be made in Vieno’s memory to the MSPCA.
For online condolences, please visit www.bostoncremation.org