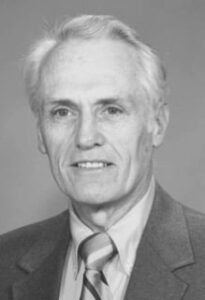 After 95 years of living a full life, Wilbur Hopkins Hardy, Jr. passed into heaven on December 14, 2019. Wilbur was the devoted husband of H. Elaine (Campbell) with whom he shared 73 years of marriage.
Born August 31, 1924 to Mary C. (Chapman) and Wilbur H. Hardy, Wilbur was raised in Beverly Farms. As an only child, he appreciated being very close to his Beverly Farms cousins of the Davis, Simms, and Williams families.
Growing up he worked in the family businesses, Hardy’s Market, and Chapman’s Greenhouse. During this time, he learned the value of hard work and the art of saving anything that might be used sometime, by someone, in the future.

Wilbur graduated from Beverly High School in 1943 where he was a member of the National Honors Society, voted best looking, and elected senior class president. He proudly served in the US Navy during WWII as Radio Operator on a PBY Rescue Plane in the Pacific Theater. After the war, Wilbur continued his education and worked for General Electric as a pattern maker for jet engines and later for Beverly Pattern Shop.
Wilbur had a wide range of knowledge and interests. After his marriage to Elaine in 1947, he built their home in Wenham and lived there until his passing. He was an active member of the community, serving on the Wenham Fire Department for 27 years, the Civil Defense Director and later as Chaplain. Wilbur was a longtime member of the Wenham Fire Company. At the time of his death, Wilbur was the oldest retired firefighter of the Wenham Fire Department.

Wilbur’s life was based on his Christian faith and helping others. He served as a deacon, sang in the church choir, and volunteered in a variety of ways. He will be remembered as a thoughtful gentleman who kept his word and was devoted to his family, friends, church, and community.

Wilbur is survived by his wife Elaine, their daughter Catherine (Hardy) Tinsley and her husband Douglas of Wenham. He was predeceased by his son Richard in 1994. He will be greatly missed by his loving grandchildren, Petty Officer 1st class Robert Munroe USCG, Katie Munroe, Shawn Tinsley and Craig Tinsley, his great-grandchildren, Joshua Booth and Bryanna Grant, his cherished cousins John Williams, Alberta and Martha Simms, and loving nieces and nephews and their families. A special thank you to the Wenham Firefighters who always remembered and honored him.